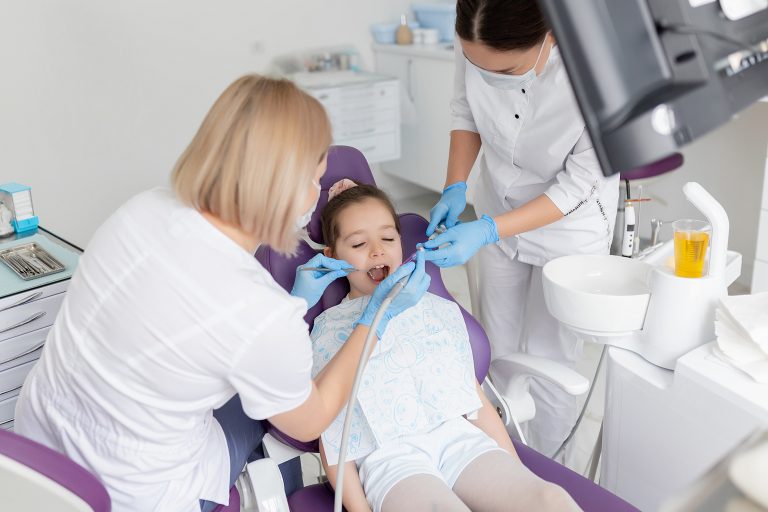 When it comes to children, abscessed teeth can pop up unexpectedly, especially if there’s an area of untreated tooth decay. To prevent severe medical emergencies in children, our Brighton kids dentists may recommend a special type of endodontic treatment, such as a “pulpotomy” or “baby root canal.” If it’s a permanent tooth, a root canal (endodontic therapy) is usually the only other option available.

Why would my child need a root canal procedure?

Your child may need a root canal if their permanent tooth is abscessed. Once decay reaches the nerve tissue, the nerve is compromised. Without removing the pulp and sealing off the tooth, the abscess can spread into the face (resulting in a medical emergency.) Root canals also preserve the tooth, reducing the chances of tooth loss in the future. For kids, pulpotomies are usually recommended.

Not at all. However, abscessed teeth do hurt. And the worse an infection is, the more difficult it is to numb the tooth. Antibiotics can help reduce swelling ahead of the procedure so that numbing medications work effectively. The good news is that with local anesthetic, your child won’t have to feel anything during a pulpotomy or root canal, just like they wouldn’t during a typical dental filling appointment.

Are there alternatives to root canal treatment?

For children, our Brighton kids dentists may recommend a pulpotomy or pulp cap, especially if their permanent tooth is not already fully developed. This can delay the need for one until the child is older.

Once a tooth nerve is compromised, the only alternative to root canal treatment is extracting the tooth. Getting a dental filling or crown instead of a root canal would only trap the bacteria and dying nerve tissue, causing recurring pain and infection. But removing the tooth would also lead to additional concerns, such as orthodontic complications due to other teeth shifting out of alignment.

The most holistic choice is to treat the tooth with a root canal and preserve it, which also eliminates the need for a tooth replacement in the future.

What signs indicate the need for root canal treatment?

Teeth that are dying or abscessed usually have a visible fistula or “pimple” on the gums next to the tooth. They also tend to be discolored, taking on a bluish or brown shade compared to the adjacent teeth.

When we take an X-ray of a tooth with nerve damage, there is usually a darkening around the root of the tooth. We may also be able to see a cavity extending down into the nerve chamber.

How many appointments does a root canal take?

In most cases, root canal treatment only requires one appointment to complete. The tooth is numbed, cleaned out, sealed off, and a temporary crown is placed over the tooth.

Older teens and adults who get root canals usually return back to the dentist’s office in two weeks for a permanent crown. But since young children’s mouths are still growing, temporary crowns are recommended for at least a couple of years. As the child gets older, the temporary crown will be replaced with something more permanent.

What should I expect after my child’s root canal therapy?

Your child will feel a little sore from the numbing medication injection and keeping their mouth open. Over-the-counter medication such as Tylenol and a cold compress are usually all that’s needed to help with temporary soreness. Otherwise, they can get back to their normal routine as soon as they’re ready. Most kids go back to school the next day. However, we do recommend a soft diet for a couple of days and not eating anything sticky, as it could pull off their temporary crown.

Can my child have sedation during a root canal?

Absolutely. Most kids do well with sedation during a root canal or pulpotomy treatment due to the slightly longer procedure. Kids City Dental offers pediatric dental sedation in Brighton for most services.